Shan Cultural Association in the UK (SCA-UK) was formed by young Shan people study or work in the United Kingdom. 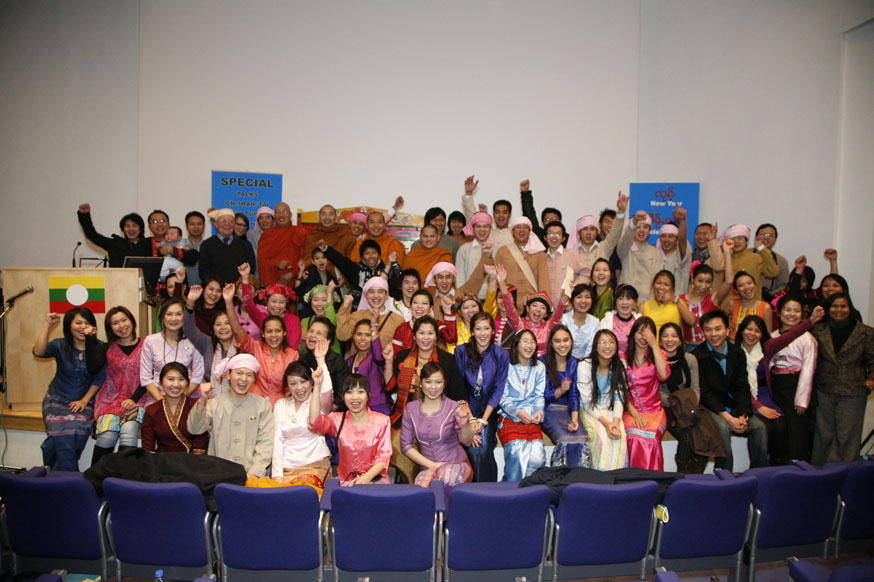 We promote and maintain Shan culture and tradition.

We participate in cultural events where we could share Shan culture and tradition with people from different cultural background. We usually celebrate Shan traditional events at least twice a year for Shan State Day in February and Shan New Year either in November or December of the year and other Shan cultural events.

We also give general welfare information and support to our members and Shan community in the UK.

On 12th March 2005, a group of Shan youths from Myanmar got together at Oxford Buddha Vihara (OBV) in Oxford to form a cultural association solely to promote Shan culture and identity in the multi-cultural United Kingdom. It is also aimed to become a hub of communication for Shan people who reside in the United Kingdom. It also welcomes other non-Shan people who empathise with the main aim of SCA-UK, promoting Shan culture and identity.

At the first meeting, Dr. Venerable Dhammasami from OBV was nominated as the Chair of the SCA-UK and other executive committee (EC) members bearing different responsibilities were also allocated. After a series of meetings both at OBV in Oxford and in London, the constitution of the SCA-UK was produced with all exerted efforts from dedicated current EC members, the initial fund was raised with generous supports and donations from our contributors. It was like dreams of our members turn into reality. The next step of the SCA-UK is to become a registered charitable organisation in the United Kingdom in a very near future. Most of the EC members are Shan students studying at London Universities.

Despite the major commitment in their studies, EC members have contributed their precious spare times to consistently work together to progress the SCA-UK with invaluable advice and guidance from its Chair Dr. Venerable Dhammasami. Within 10 months time from its birth, the SCA-UK organised to celebrate the welcoming of 2100th Shan New Year on Sunday 18th December 2005 at OBV. It was small event though about 50 or more guests turned up at this successful event. The elders and seniors showed their interest, support and courage which made the members felt so honourable. A highly regard senior Shan delivered a short speech and shared his old time experiences with later generations, and one could see a wave of nostalgia rippled within each and every participants. Majority of participants, the youths, expressed their enthusiasms in preserving Shan traditional events. It gave the same atmosphere as the traditional New Year celebration back home.

On Saturday 11th February 2006, SCA-UK members organised their second event, to celebrate the 59th Shan National Day, which is one of the most important and historic days for the people of Shan State. The aim has always been to honour and remember what the leaders of the Shan State had done 59 years ago.

As part of essential cultural materials, members have worked on getting a set of percussion musical instruments and some dance costumes. SCA-UK members have greatly appreciated the help of its Chairman, Dr. Venerable Dhammasami, who put an effort to have those instruments donated by his devotees during his short visit in Myanmar. The order placing and the shipment costs were kindly contributed by the family of Nang Zun Pan Aye, one of the History and Cultural officers in the SCA-UK executive committee. Soon after the arrival of the musical instruments on 28th March 2006, SCA-UK was invited to take part in a celebration at Wimbledon on the 18th of June 2006, which commemorated the 60th anniversary of His Majesty the King of Thailand accession to the Throne.

SCA-UK received huge cheers from the audience for its very first great performance with its unique traditional dance and music. It was also such a privilege for the SCA-UK to have it mentioned in Thai National newspaper. At this event, SCA-UK was successfully raising its profile among multinational communities whilst fulfilling its main aim to promote its culture and share it with the others.

On 20th June 2006, SCA-UK opened its community account at a UK bank and is ready to receive donation both from members and generous supporters via that account.

SCA-UK has always looked out for any available opportunity to participate in any cultural events to fulfil its main aim to promote and cherish Shan culture and share it with other people from different cultural background in the multicultural United Kingdom. This year, the members have organised a bigger New Year celebration than last year with more guests from many different cultures in welcoming the 2101st Shan New Year at the much bigger venue, the University Colleges London (UCL) main building today on 18th November 2006. Click here to check out our upcoming events.