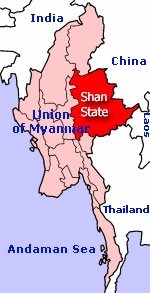 Shan are ethnically and linguistically members of Tai ethnic group (Siamese branch of Indochinese people) to which Thais and the Laotians also belong to. It was suggested that the term Shan may come from Siam, the root of Syam and Assam. Referring to their skin colour, neighbours called Tai people as “Siam”, derived from Sanskrit (Pali) word Syama, which means “golden” or “dark” colour. It was written as Syam or Rham and pronounced as Shan in Burmese. When British came to rule Burma in 19th century, they called Tai people as Shan based on Burmese pronunciation and Tai people in Burma (today Union of MYANMAR).

It was suggested that Tai were the first to migrate from their original seat in Central Asia towards the south and to settle along rivers Mekong (Myanmar/ Thai), Menam, Irrawaddy (Myanmar) and Brahmaputra (Assam). By A.D.18 (early Christian era), Tai already had their first seat in on the Shwele river (at China-Myanmar border) and then the Tai (Shan) dominion gradually extended in the country of Irrawaddy (now known as Union of Myanmar).

Today, most of the Shan inhabit the Shan State in North-East of Myanmar. The current Shan State is the biggest of the 14 states and divisions of the Union of Myanmar covering 60,000 square miles, ~23% of the of the entire country (the size of England and Wales combined). The State has 9 millions Shan inhabitants(~16% of the entire population of the country) along with other migrants from other parts of Myanmar and neighbouring countries like India and mainly China.

There are also some groups of Shan inhabitants scattered throughout other parts of Myanmar and neighbouring countries, such as Tai Khamti (Khamti Shan) in the Sagaing division and Kachin State of Myanmar, Tai Ahom, Dai and Thai Yai in Northeast of India, Yunnan province of Southern China and in Northern Thailand.

Although Shan refers to themselves as Tai, they were known by a few different names, such as, “Thai Yai” in Thailand, “Dai” in China, Tai Ahom in the Northeast of India and “Shan” in the Union of Myanmar (formerly Burma) and to the western world.

It was suggested that the Tai/ Shan, its sister groups (the Thai and the Lao) and its cousin groups (the Zhuang and the Kam Sui languages in China) came from a common Kadai root (one of the language groups of East and South Asia) 2000 years ago. Although these groups were separated geographically and thus have been linguistically distanced they still share much in common.

Although the Shan State has been under the British and Burmese rules for centuries, Shan maintain their distinct identity from other fellow ethnic groups of the Union of Myanmar, in terms of language, culture and tradition.

Like Thai food being famous in worldwide, Shan food is the most popular flavour in Burma. Typical Tai temples are mainly found in Yunnan province of Southern China and its architecture is very much similar to those of temples in Thailand.

Shan has its own flag which was one of the outcomes of Panglong Agreement in 1947, which served as the most important stepping stones to independent Union of Myanmar today. On Shan flag, Yellow represents the religion of the people of Shan states (Buddhism), Green represent the good agriculture the people of Shan land dwell on, Red represents Bravery of Shan State people and White represent peace and stability for the future Shan State.

Apart from the Shan, there are also some other sister ethnic/nationalities live in the Shan States of Myanmar, other nationalities of the country like Palaung, Pa-O, Wah, DaNu or Innthar, etc. They speak different languages from Shan people and dress differently.